Holkham Summerhouse with Double Doors in the Gable 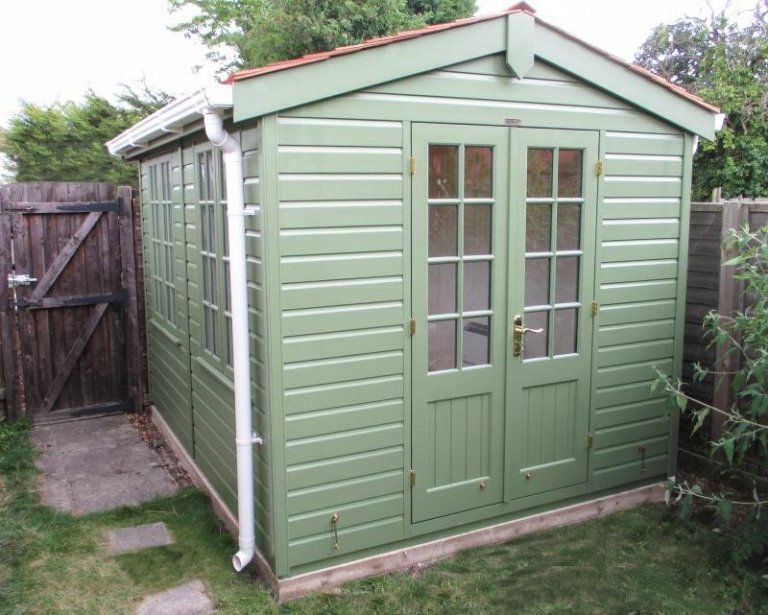 Holkham Summerhouse with Double Doors in the Gable

This 2.4 x 3.0m Holkham Summerhouse is a bespoke design to best fit the customer’s narrow garden, and it has been installed here in Arbrury, Cambridgeshire to be used as a year-round craft room, giving the customer a dedicated space to work on her hobby in.

Cedar shingle tiles have been used to give a natural look to the roof, and there is white guttering with a downspout on the front side to protect the windows underneath from excess rainfall. The paint colour chosen by the customer to finish off the outside appearance is a green colour called Lichen from our exterior paint range, which blends in very well with the greenery already existing in the customer’s garden.

To make this a garden room suitable for year-round use, rather than just a summer house, the customer opted to have double glazed windows, full insulation, painted matchboard lining on the internal walls in Ivory (to give a light, bright feel), and she also chose our electrical pack with a heater, so they are sure to be very comfy inside, whatever time of year it is.

Other features also include a Natural lacquer on the floor to give it a nice sheen and a protective layer, as well Georgian style windows, and polished brass door and window furniture.

For more information on our range of Summerhouses, Garden Studios or Garden Rooms, all of which can be made appropriate for year-round use, please contact us online, call us on or create a building yourself to your own requirements with our Online Garden Building Planner Tool. 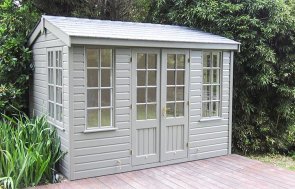 An apex roof and clean lines make the Holkham an attractive choice, whether you want a simple relaxation spot or a year-round hobby room. 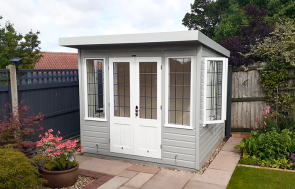 A contemporary style summerhouse with a pent roof and overhang, the Thornham will give any garden a modern feel. 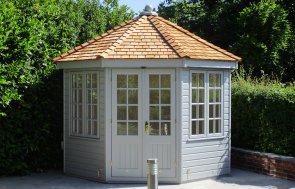 You will be able to appreciate your garden from many angles inside our traditionally styled Wiveton. The walls and ceiling are lined and insulated for year-round comfort.

Built to use for your comfort all through the year, the hipped roof Garden Room is a traditionally elegant building.